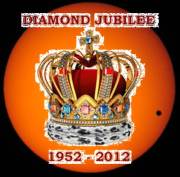 What does the British Queen have in common with the Venus Planet? Well both of them have recently gifted us with a once in a lifetime experience: The Queen with her Diamond Jubilee celebration and Venus passing between the Earth and the Sun. We will not see either of these events again for the rest of our lives. Both occasions drew large crowds; people were inspired, people were amazed.

As the saying goes, “you cannot step into the same river twice”. Isn’t it true that every single moment in our lives, no matter how you define “moment”, is in fact a once in a lifetime experience? What would happen if we were to give each moment the same kind of attention, anticipation and joy we gave to the Queen and our neighbour Venus?

Understandably, some “moments” are easier to do this with, such as the birth of a child, planning for an amazing holiday, etc.; doing photocopying at work or grinding through routines may not have the same appeal!  Nonetheless, let’s consider what Muhammad Ali used to say: “I am the Greatest”. He didn’t say “I am the greatest boxer”, he simply said “I am the Greatest”. In fact, he also said he would be the greatest no matter what he had ended up doing, he said if he had been a bin man, he would have emptied more bins and would have been doing that better than anyone else! Then there was this poignant thought from Helen Keller, “It is not about doing great things, but doing things in a great way.”

Spiritual awareness and development need not always be something regal or astronomical, in the truism of Oneness and Mastership, it is up to us to decide whether something is worthy in God’s eye.