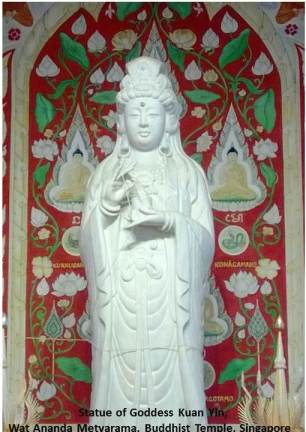 This is the final article of a series of short posts introducing the eight patronesses of The Goddess Dance workshops to be presented in Singapore, Malaysia, Hong Kong and Sydney.

In Buddhism, bodhisattvas are beings who have achieved enlightenment and are thus ‘eligible’ for Budda-hood. However they have chosen to be remain in the cycle of birth and rebirth in order to serve humanity and assist every satient being on Earth in achieving nirvana himself. Avalokiteshvara, the Bodhisattva of Infinite Compassion, is probably the most popular and beloved of all bodhisattvas.

In the initial years of my healing practice, I worked closely with the Lords of Karma, especially Kuan Yin, in releasing the presence of “lost souls” (humans who have passed on but whose soul energy remain in the earth realm) from the energy system of my clients or their homes. During these sessions, I would sense the deep compassion of Kuan Yin as she gently counseled and urged these souls to let go of their human emotions of grief, guilt, regret, hatred, resentment and other dense energies which were keeping them stuck to the world of form.

In The Goddess Dance workshop, working with Mother Earth, Kuan Yin will serve as a catalyst to rebalance the water element in our body in order to build resilience and protection over our emotional body. She further explains to properly integrate and anchor the 5th dimensional vibrations onto the human physical vessel, we need to first cultivate and maintain a perfectly balanced emotional and mental body. As part of her teachings, Kuan Yin will also touch on the metaphysical relationship between our immune system (thymus gland), the Water element and the West direction (Space).

As we approach next week’s Equinox, I am eagerly looking forward to dance along with the Divine Mother and her Goddesses in celebration and honour of Time, Space and Elements – which are the energy matrices and programs connecting the world of physicality with the higher heavens.

* THE GODDESS DANCE WORKSHOP SCHEDULES and PROGRAM at The Goddess Dance.

* EQUINOX INAUGURAL WORKSHOP in Singapore, 21 and 22 September 2013 Equinox. Register with Andy at andy@acast.me

* KNOW THE GODDESSES THROUGH THEIR MESSAGES :