A sparkling New Moon to everyone !

If you have been noticing your electrical devices (and their cabling and circuitry) breaking down more often than usual, ruling out the possibility of their higher usage or  inferior quality, such ‘mystical’ occurrences could be a sign that your aura (also known as electro-magnetic field) is becoming more electrical, rather than remaining in balance in both its electrical and magnetic charge. Such a symptom is becoming more common as our light body awakens along with the stepped-up frequency of Earth’s.

The magnetism existing in our aura is closely supported by Earth’s magnetic field and is essential for ensuring the physical body remains perfectly functional during the current time of rapid vibratory changes, around and within us.

In order to restore the body’s weakening connection with the Earth’s magnetic field (especially applicable to for those whose energy frequencies are heightening but do not engage in physical exercises or deep breathwork regularly), it has become crucial that we ground the higher frequencies of our light body into the Earth properly through a 5th dimensional chakra called the Earth Star Chakra (see diagram below).

Energising our the Earth Star Chakra frequently offers the additional benefit of  improving the effectiveness of our manifestation ability. Thus, the guides are recommending that we anchor our New Moon intentions into the core of Mother Earth through the Earth Star Chakra from now on, as opposed to the ‘conventional’ way of releasing intentions to the Universe through the Third Eye Chakra. Their rationale – to readily magnetize a new reality into the world of physicality, focused thoughts alone are no longer sufficient; we could harness the magnetism of Earth to yield faster and more accurate manifestation results. 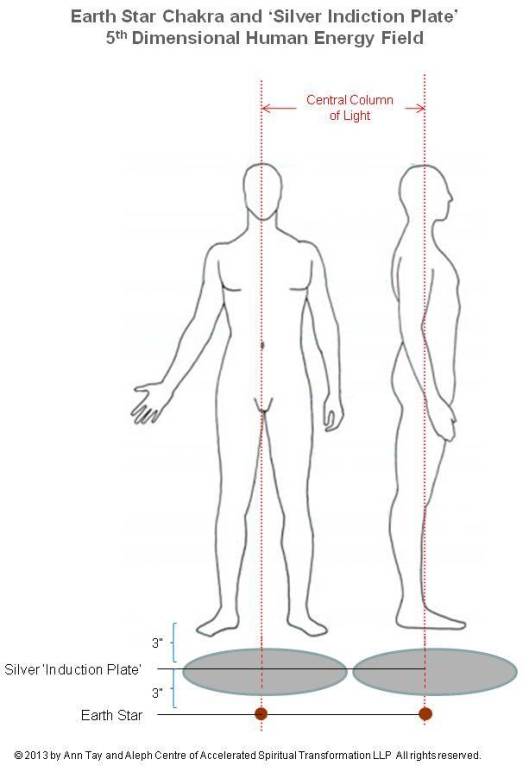